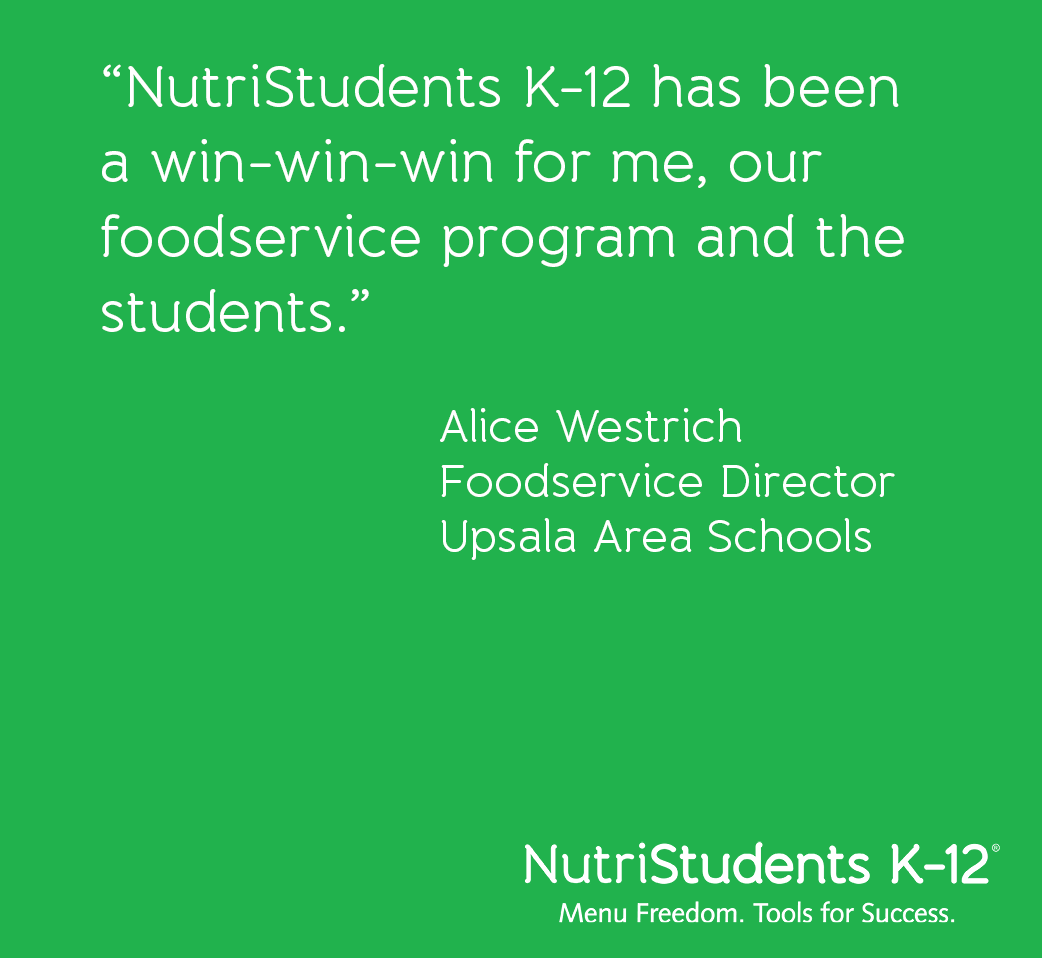 Starting a new job as a foodservice director or head cook can sometimes be likened to drinking from a fire hose. For those who are going it alone without a background in nutrition or a partner like NutriStudents K-12, it can be even more challenging. Alice Westrich can attest.

Westrich is head cook and co-food director at Upsala school district, about 100 miles northwest of Minneapolis. The district operates out of a single campus serving 345 preK-12 students from Upsala and surrounding communities.

“When the former head cook resigned, the school called me and wondered if I’d be interested,” Westrich said. “We are farmers raising corn, alfalfa and barley in addition to about 100 head of beef cattle. The school said they needed someone who wasn’t afraid to get up early! I was intrigued and health insurance was an attractive benefit. So, I interviewed, passed ServSafe and was offered the position.”

That was 16 months ago. At first, Westrich followed the menus and processes of the previous head cook, serving two entrées per day.

“We were wasting so much food,” she said. “One entrée was always more popular than the other and food leftover from the second entrée got discarded. Trying to figure out what entrée would be more popular on any given day was challenging at 6 a.m. – even for me. It made matters worse to see the disappointment on the kids’ faces when the entrée they wanted had run out.”

In fall 2020, a colleague of Westrich’s from a nearby school district told her about NutriStudents K-12.

“I was skeptical at first,” Westrich said. “I just wasn’t sure it was a good idea to make a change when I was so new to my job. But she highly recommended it and after a discussion with administration, I decided to try it. I am so happy I did! NutriStudents K-12 has been a win-win-win for me, our foodservice program and the students.

“We are in ‘meat and potatoes country’ here in central Minnesota,” she said. “Even so, the kids were ready for a change and I was too. They immediately liked it because every day seemed to be something new. The chicken nachos, chicken patty on a bun and the queso meatball sub were all hits.

“It’s fun to expand their horizons and serve food they haven’t experienced before. Like the queso meatball sub – the little kids were fascinated, wondering why the meatballs were on the bun! We also recently served chicken nachos and quite a few kids had never had cilantro before – and liked it.”

Another advantage of NutriStudents K-12 menus Westrich discovered is that she could serve one entrée instead of two.

“Offering just one entrée concerned me at first,” she said. “But in addition to being very well received by the kids, it has been hugely beneficial to me and the kitchen staff. In addition to less waste, it has made our work more enjoyable. Prepping ahead of time is easier and we are all working toward one common goal – preparing one entrée and making it the best it can be.”

“I was at a basketball game recently and a student walked over just to say thank you,” Westrich said.

She is also feeling much better about her first USDA Administrative Review, scheduled for the 2021-22 school year. 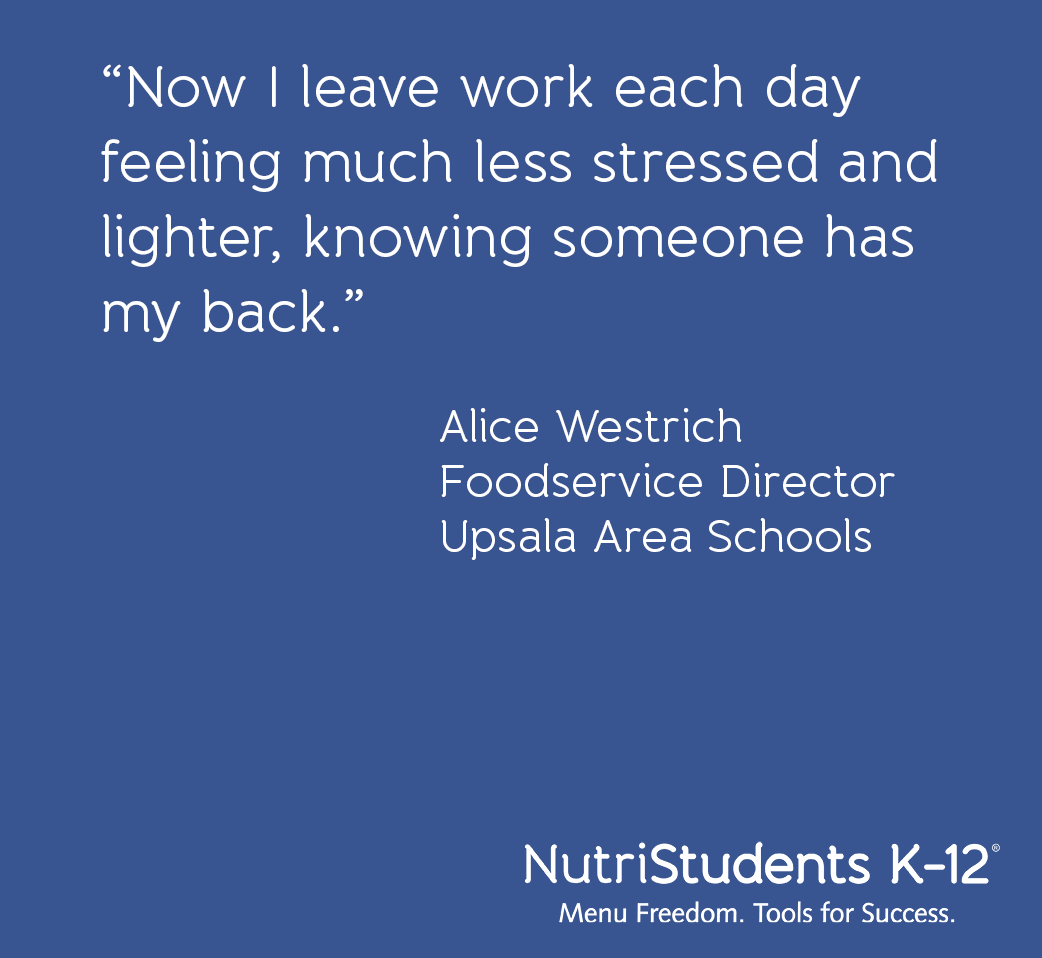 “It used to literally keep me up at night,” she said. “I wanted so badly to follow all the rules, but it was daunting at times. Now I leave work each day feeling much less stressed and lighter, knowing someone has my back.”

NutriStudents K-12 training resources have helped ease her concerns about operating her program according to USDA procedures. NutriStudents K-12 background and videos on offer versus serve helped Westrich understand meal components required for a reimbursable meal and offering students components they willingly choose rather than throw away.

“When people ask me if I like my job, I say yes! It’s like getting to host a graduation party every day,” she said. “NutriStudents K-12 has been a huge help and confidence booster. It saves me time researching and planning, knowing the menus are USDA compliant. They are also so supportive – I can call them anytime with questions. It’s like having a partner who really understands the system and is always there to help.”